What People Are Saying About Us

Your story could be next and inspire others to join our community.

"I had to travel all the way from the UK to meet Brent and I wasn’t disappointed!

One noticeable thing about Brent is that he has a certain positive energy about him, a vibe that you can’t put into words. You have to meet him to understand. It’s something about the way he carries himself, it rubs off on you!

Seeing him interact with women, the way he spoke to them, the dialogue, it was just fantastic! He knows exactly what to say and how to say it. Simply watching him in action was incredible! Since our meeting I’m a more positive, confident person. Brent is a good guy, likeable, genuine. He is passionate about what he does and what he teaches. A night spent with Brent will be a night to remember!"

"The coaching experience with Brent was a major paradigm shift for me. Never in my life have I ever seen women respond so powerfully to a man. What I saw that night expanded my belief for what is possible!

What I especially liked about Brent’s method was how it leaves a man feeling powerful before, during, and after the initial interaction with a woman or group of women. Brent’s indifference enables him to retain his dignity.

While other styles of teaching success with women involve a lot of work during interactions with women, Brent demonstrated what can best be described as “minimal effort, maximum gain.”

I found Brent to be a kind and respectful person. I had a fun time hanging out with him. The many things that Brent taught me are empowering, not only in my interactions with women, but in other various aspects of life also. In addition, when compared to other success-with-women methods I have tried in the past, Brent’s is the least time consuming.

I have more time now to have a fuller life and pursue the things that I am passionate about, instead of making time to go out for the sole reason of picking up women. I am very grateful that I had the opportunity to have this coaching experience. I am certain it will save me many years of trial-and-error."

"The Simplest Way Of Interacting With Women"

"Working with Brent was probably one of the most eye opening experiences I’ve had. I knew that Brent would be the last teacher I’d ever see because this guy was at another level beyond anybody I’d ever seen.

I’d never seen anybody make everything look so effortless. I saw things that really blew my mind, like 3 girls propositioning him and telling him what their hotel room numbers were. And it seemed like he did nothing to make it happen. There were no clever lines, nothing witty, just normal conversation.

Needless to say, Brent will shift how you think about and interact with women permanently, and I would say, that if you are just getting started or even somewhat advanced, then Brent would be the person to see. This was by far the simplest way I’ve ever seen of interacting with women."

"Women Are Noticing Me More And Much More Flirtatious"

"Working with Brent was awesome. I was at a point where I had been studying a bunch of other stuff, struggling to understand it and had so many unanswered questions. Compared to some of the other material in this industry, I consider Brent to be like an evolutionary step ahead of everyone else.

Training with him confirmed that this guy knows his stuff. I mean, he was creating attraction with a super hot bartender just by saying the most mundane stuff, not hitting on her at all; I could actually SEE her becoming attracted. She kept trying to find us later in the night, coming up to our table saying she’s been looking all over for us. He was like, “See?” And the SAME thing kept happening throughout the night, with other hot girls.

What the heck is he doing that magnetically attracts women over to him? Good thing I came prepared with a bunch of questions to ask. I must’ve asked him 4000 questions. The guy was so generous, answering every question I had, he started to loose his voice at the end of the night! I came out with an entirely new perception of attraction, and of women. His material on power deserves a Nobel Prize in my opinion!

I think his approach and style is great. He comes across very warm and powerful at the same time, a pretty unique combination. I really can’t thank him enough; it was totally worth the investment because every new day I feel better than the last. I’ve been practicing what he told me to do, and I feel more confident, more powerful, and women are responding.

Women are noticing me more, I see them looking at me differently; they’re more flirtatious. Today a mom was trying to hook me up with her daughter right in front of her, and I’m not doing anything! Well I suppose I am, but it just feels more effortless.

I’m noticing that I don’t have the confusion I had anymore, I’m catching myself saying things to girls I wouldn’t normally say, I finally feel like I’m really starting to “get it.” Now it’s just a matter of integrating this into my life and keep practicing and growing. Thank you Brent, you’re a genius!"

As a person, Brent is warm, friendly, and powerful. Naturally, I thought I knew what being powerful was supposed to look like, but I was blown away when I was actually around it. Brent is someone you really cannot describe because he radiates a positive infectious energy….and yes; everyone comes over to see what all the fuss is about. Yes, women started coming up to us. Yes, women bought us drinks…and so on and so on. Once it started, there was no stopping it. There is no substitute for seeing it in person because it shakes you to your core to actually see things you thought were impossible or required a lot of work, in fact, be proven possible over and over and over again….with very little external work. It is very clear to me now that all the real work takes place on the inside, before anything amazing can happen.

Imagine before you went to bed one night you created the most incredible life possible in your head. Maybe wherever you went everyone just started giving you things and treating you like they NEED you to be there to make the party happen. Imagine the manager of the restaurant is watching how friendly you are to everyone else waiting for a table and comes up to you and says, “I don’t know who you are, but we need you in here. Let me get your party a table right away. You don’t have to wait forty five minutes.” Then the hottest waitress, who wasn’t even serving your table, brings you a free dessert and offers her own “dessert” for later. Imagine all those attractive women you could never talk to before started coming up to you to start conversations right in the middle of you making out with another hot girl. They actually line up to be next. They start calling and leaving you messages just to get physical…and then apologize on the third call that evening because “they don’t want to bother you, but there is something magical about you”. Imagine a world where you walk around with a force field that positive people are drawn into and negative people bounce off of.

Now, imagine if you had the power to wake up the next morning from this thought in your head and make it real. Too much of a stretch? None of my friends have been able to believe it either. Well, imagine there was a person who could teach and show you how to make this fantasy real and even better…ANY FANTASY YOU CAN IMAGINE. I can tell you from personal experience this person does exist and the second best thing I ever did for myself was spend a weekend with Brent. The absolute best thing I ever did for myself was to start putting everything I did learn from Brent into action. After my coaching session I remember driving home in denial. I did not want to believe I had this power Brent kept talking about. But, the evidence was everywhere and I finally woke up one morning and gave into it. There was no other choice. I gave in and all this magical stuff is starting to happen. Now I can’t lie, it really does not happen overnight. I mean that incident with the waitress who gave me the free dessert and was willing to walk out and lose her job just to have sex with me did not happen until ten days after my coaching session. In retrospect, those ten days of hesitation were for me anyway. Once it starts, IT NEVER ENDS!


P.S. I am in the trenches just like you still learning new things with each passing day. There is nothing wrong with making a mistake as long as we learn from them and that’s what I am here to share with you. 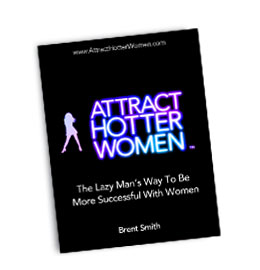 • The lazy way to attract women; how to systemically eliminate all “effort” with women (even the most beautiful ones) that makes your attitude sexier than James Bond’s

• Where to go out at night – so that you can focus on FUN, and let women come to you!

• How to “be the mayor” and socialize with everyone, in a way that makes women mysteriously drawn to you

• Why asking for girl’s number is almost always bad. How to get her to ask for or want yours … plus, a simple sentence that trains her to text you later that very same night

• You’ll get simple, yet stunningly powerful affirmations you can use to “embed” highly empowering beliefs about yourself DEEP into your subconscious (this is vital, because you must have the right set of beliefs in place for this process to work its full magic)

• Some of the exact text responses I use with women that cause them to suggest coming over to my place!

• Plus, how to effortless set the mood and hang out with her at your place, so that she wants sex even more badly than you do

And that’s only the beginning …

Bonus Number One, the QuickStart guide

I want to make sure you get the most results from this program in the shortest time possible - so I also created a Quick-Start guide that makes it brain-dead easy for you to get fast results.

Many men have used this guide alone to get women the same night they get this program.

You'll learn how to be the guy women want to hook up with immediately, rather than the guy women date 5-7 times before getting physical.

This is important because if you don't clearly indicate who you are she won't feel a sense of urgency to talk to you or get together with you and will flake because you are like every other guy competing for her attention.

How to clearly tell her that you're the sexy, fun, "no strings attached" guy rather then the average, boring provider guy. I’ll show you how inside ... and much more.

Bonus number Three. The “Psych Up”

Most guys go out with great intentions but with fear of rejection, what happened last, scarcity, anxiety and then wonder why women aren't reacting positively to them.

Even if you know what to say and how to say it. It's important to psych yourself up so that you come off as the sexy, confident, carefree guy that women feel comfortable with and can't resist. You’ll learn this and much more.